Shahezadi Syed would be BJP candidate from Chandrayangutta constituency in Hyderabad to take on AIMIM leader Akbaruddin Owaisi in the state assembly election.

Shahezadi, a novice in electoral politics, was a leader of ABVP student wing of the Rashtriya Swayamsevak  Sangh. She hails from Adilabad in Telangana.

Shahezadi, a post-graduation in political science from Osmania University in Hyderabad, claimed there has been no improvement in the condition of common people in Chandrayangutta and other parts of the old city of Hyderabad though All India Majlis-e-Ittehad-ul Muslimeen (AIMIM) has been elected for the past two decades.

Speaking to PTI, she told “I am asking what did Owaisi do for the people? What change has come in your lives? What about your children’s education and how many of them are employed? How many have become engineers and doctors”?

She said she can work for people’s welfare by implementing central government schemes.

She alleged a communal atmosphere prevailed in the old city of Hyderabad, AIMIM’s stronghold, and there has been no change in the lives of common people, including ordinary Muslims, with AIMIM at the helm.

Dismissing allegations that BJP is a communal party, she said such a mindset has been established that the organization was opposed to Muslims. It is the BJP which made the late A P J Abdul Kalam President of India and BJP’s Muslim leaders like Sikandar Bhakt, Najma Heptulla, and M J Akbar held important positions, she said.

A budget has been increased for Maulana Azad Urdu University in Hyderabad and for madrassas in Uttar Pradesh under a BJP government, she claimed.

She thanked BJP’s leadership for making her the candidate though she does not have money power.

BJP’s Telangana unit President K Laxman said Shahezadi can expose the “misdeeds of AIMIM and how they are exploiting poor Muslims.”  Shahezadi hailed Modi government’s decision on triple talaq issue and she wants to work for the empowerment of the Muslim women, he said. 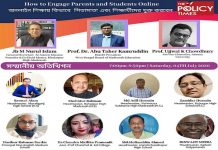 The average global temperature limit could exceed 1.5 degrees Celsius in...

Will Bengaluru become uninhabitable in the upcoming years due to a...

A Misunderstood Kejriwal Victim of Fake Campaign too