The government and the authorities in Rajasthan have imposed a uniform for girl college students. The uniform allows the college girls to wear only solid colored salwar suits and saris. Probably, the government officials who imposed this rule have forgotten that India is the free country and anyone is allowed to wear a dress of his or her choice so long it does not signify obscenity.

However, the authorities have an alibi for others to buy. Jyotsna Bharadwaj, Joint Director (Administration) at the state directorate of college education said, “We don’t have any role in this order, the students had put before the minister that students from other colleges come in their college and hence, to restrict that, there should be a dress code. That’s the reason we have asked the colleges to send us the color of the uniform after negotiating with senior faculty members and students’ union representatives.”

When asked whether girls will be allowed to come to class only in salwar suits or saris, she said, “What issue will we have if our daughters wear pants and shirts? The directions to wear sari and salwar suit were given for married girls whose in-laws don’t let them come to the college without a sari, but the final call on this matter will depend upon feedback from students and, of course, the government.”

However, the students have denied that they raised such demands. “Who raised the demand for the uniform in colleges? Our representatives who went for the dialogue didn’t speak about it, then why it is being imposed on us. We are not in favor of a dress code in colleges, forget sari/salwar suit” said Gargi, who is a Bachelor of Visual Arts student at the Rajasthan School of Arts.

The defense of Ms. Bharadwaj for this order has been that it is a decent order. “Sari-blouse and salwar suit was mentioned keeping in mind married girls, but the media can make an issue out of any decent order” she added.

However, can she explain what is indecent if the girls wear western dresses? That means all westerners are indecent? And if they want to restrict the influence of Western culture, will they stop students from speaking in English or ask the boys to wear dhotis in college?

Calling for immediate withdrawal of the order, People’s Union for Civil Liberties (PUCL) General Secretary Kavita Srivastava said, “Limiting the clothing to just salwar suit and sari in these times is throttling the students’ freedom to choose how they wish to express themselves. This is outrageous and must be withdrawn.” 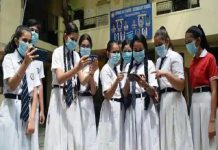