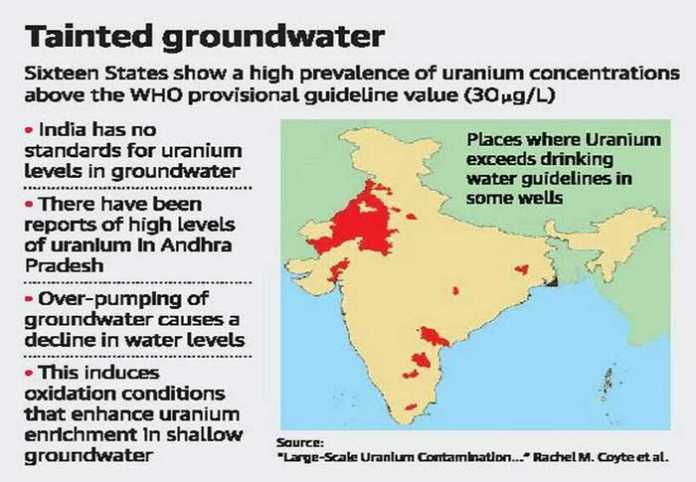 The findings were from researchers led by Avner Vengosh, a professor of geochemistry and water quality at the Nicholas School of the Environment at Duke University in the United States.

The American researchers tied up with Rajasthan government’s Ground Water Department and Gujarat Water Resources development Corporation in getting details and analyzing groundwater samples from 226 locations in Rajasthan and 98 in Gujarat.

Vengosh said in a statement, “Nearly a third of all water wells we tested in Rajasthan contained uranium levels that exceed the World Health Organization’s safe drinking water standards.”

The problem of Uranium is seen in many other parts of India such as Punjab and Haryana and Southern and Eastern states too. This shows that this problem is affecting India as a whole.

“One of the takeaways from this study is that human activities can make a bad situation worse,” Vengosh added.

“The results of this study strongly suggest there is a need to revise current water-quality monitoring programmes in India and re-evaluate human health risks in areas of high uranium prevalence,” Vengosh explained.

How does it contain Uranium naturally?

Rachel Coyte, a Ph.D. student in Vengosh’s lab elaborated on the process “When over-pumping of these aquifers’ groundwater occurs and the water levels decline, it induces oxidation conditions that, in turn, enhance uranium enrichment in the shallow groundwater that remains.”

There there is a need for water quality monitoring in India to look into the potential health risks that cases such as Uranium can cause. Thus the implementation of preventative management practice can be put forward.

“Including a uranium standard in the Bureau of Indian Standards’ Drinking Water Specification based on uranium’s kidney-harming effects, establishing monitoring systems to identify at-risk areas, and exploring new ways to prevent or treat uranium contamination will help ensure access to safe drinking water for tens of millions in India,” Vengosh said.

Accession of the state of Jammu and Kashmir with India