In his opening remarks, Dr. AmbrishSaxena, Convener of the conference, stated that this panel discussion was similar to the one, held on July 6 which discussed Asian Celebrity. The only difference is that this panel will touch upon every aspect of the business of Indian cinema in Australia. 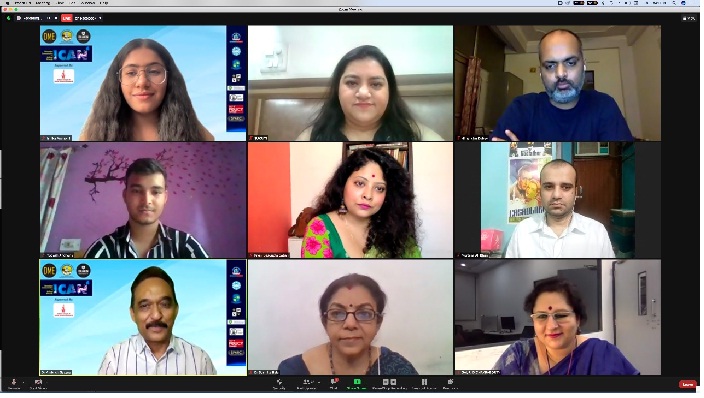 Ms. Achala began by saying that Indian cinema has grown leaps and bounds in Australia. As the Indian population is growing in Australia so is growing their demand for Indian films. Hindi films are more popular at the Box office but it is the regional cinema especially Punjabi and Tamil are ruling the roost.

Ms. Datar also highlighted the fact that there is a growing demand from the distributors for Hindi and regional cinema in smaller cities and towns of Australia. 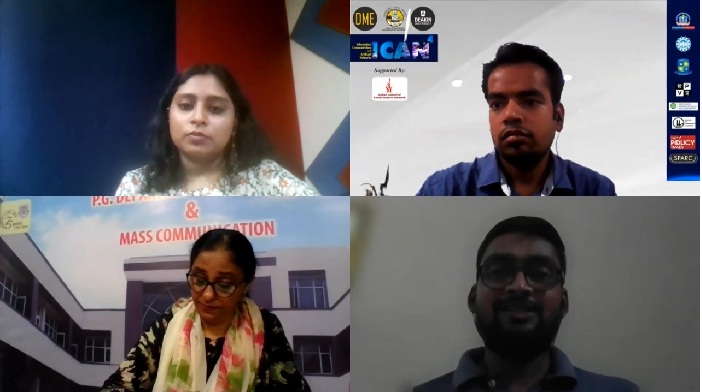 Mr. Karthik was of the view that those who finance the films today control the narratives. He spoke about the power of soft diplomacy and the role and relevance of content and narratives in the process. “It is a golden era of production. The problem is we have too much content. The real content which catches the imagination of the audience is rare,” he pointed out.

Mr. Anupam expressed that Indian films are seen as “item numbers” on the international platform. The Australian market is highly deregulated.  “The hallmark is that Indo-Australian origin film-makers are concentrating on making films on Indian themes. Very soon we may see KuchKuchHotahai types being produced from Melbourne,” he said.

PriteshRaniga spoke about his journey in film distribution from Fiji to Australia. Earlier we focused on the Punjabi language and Punjabi culture Hindi films. “Bhaubali proved to be a turning point for the distribution of Indian cinema in Australia”, he said. 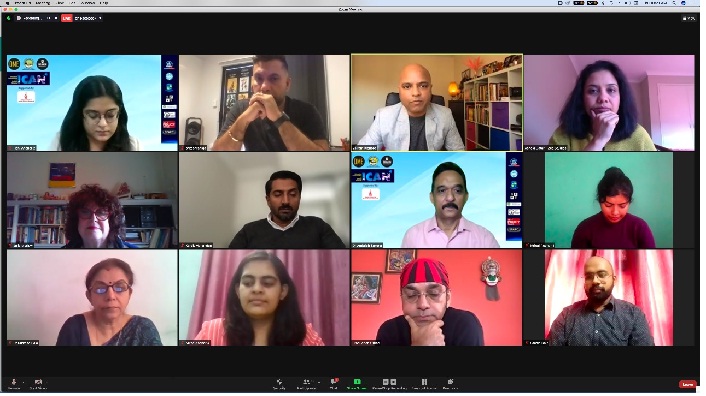 “Market has changed with Covid. Content is supreme. Distributors, now, look for the right content for the right people,” he maintained.

Ms. Julie spoke at length from the perspective of Indo-Australian collaboration in cinema. “There is a need for synergy between Indian and Australian filmmakers. It is a long process and needs patience. We need to wait,” she said. Pointing out the growing popularity of OTT platforms, particularly Netflix and Amazon Prime, Julia Marlow said that OTT has raised the bar to explore new areas and subjects in cinema. Well-crafted ideas and scripts can only survive the international market. Australia provides a huge market for Indian original content.

Concluding the session Dr. SusmitaBala, Associate Convener of the conference said that there is no dearth of good content in Indian cinema. It needs to be explored by the international audience.

Technical Session VII on Day 8 of ICAN4 was on the theme – ‘Fake News and discriminatory content during COVID- 19 pandemic’, chaired by Dr. SimranSidhu, Head, PG Department of Journalism and Mass Communication, Doaba College, Jalandhar, Punjab, and Ms. Sruthi VS, Assistant Professor, DME Media School as the co-chair. Research papers on topics like Rising in Fake News during COVID-19 on Social Media, Reviewing the Fake News Conundrum, and issues related to disinformation were presented during the session.

Dr. AmbrishSaxena opening the session said, “Discriminatory content and Fake News are one of the biggest problems of our time. It is good to have a discussion on this theme in ICAN4.”

Dr Simran praised the efforts of the scholars in bringing out the unexplored aspects of misinformation and gave her critical remarks for further improvement in their work.

Jyotirmay Deb, Department of Humanities and Social Sciences, Techno India University, Kolkata, was announced as the best paper presenter for Technical Session 6 for his paper on ‘The Effectiveness of Story Narrative in Television Advertising with the reference of psychographics in Viewers of Kolkata’ at the end of this Technical Session. 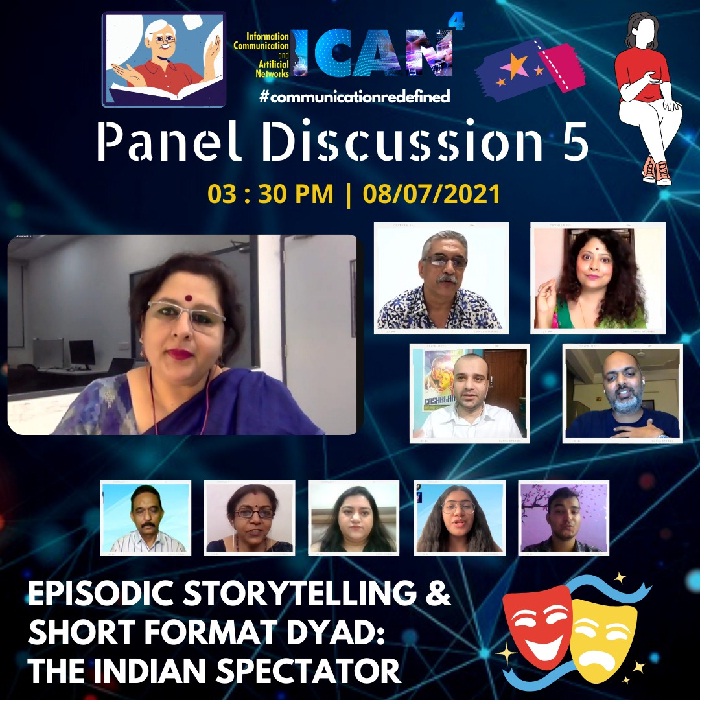 At the beginning of the session, Dr AmbrishSaxena said, “Cinema and Television came to the fore in every entertainment medium possible. The kind of changes in cinema, daily soaps, and web series is very interesting and there are many more things left to learn.”

Dr Chakraborty said, “The entertainment experience today is more immersive than ever before. Content subscription today is the newest evolution in the media industry; people have diverse platforms to choose from. Social taboos are getting busted and every choice is respected which results in good content being portrayed. Now, storytelling consists in a totally different manner which keeps involvement of spectators as a priority.”

Ms Piyali said, “The stories after the pandemic have changed the consumption patterns of the people. With the advent of YouTube, Gen Z and millennials are looking for stories that are much authentic and adapted from their lives.”

Mr Murtaza gave his views on how these days content of storytelling has become mainstream and there’s a need to change the format to outstand.  He said, “Ray web series has raised the bars by using a different way of presenting simple stories by the intermingling of ideas.  Similarly Ertugrul, a Turkish drama used the concept of relevant content that has gained popularity across the nation.”

Mr Himanshu in his address said, “A story when presented in the correct order keeps the audience hooked. One has to pre-visualize the storyline and the camera movements depicting past to present timelines.”

Dr SusmitaBala while concluding the session expressed her happiness over the fact that everyone learned a lot of the valuable discourse. “It will certainly change our perceptive towards storytelling,” she added.

Dr AmbrishSaxena, while introducing the session said, “Today’s workshop on the topic 360-degree virtual reality will make a huge contribution to our students in understanding the technology associated with journalism.”

Dr Atkins addressed the participants regarding the latest technologies being widely used in Journalism including 360-degree Virtual Reality Storytelling which could be an interesting and effective way of storytelling in present times. He said, “Today when we look at the evolution of 360 Virtual Reality, we find that subjects tell stories themselves. The feeling of the psychological presence and the feeling of the real world around us gives a different kind of experience in mediated communication.”

Dr Atkins also commented that “The goal of 360 VR experience is to educate youth on topics like climate change which offer young generation a chance to travel virtually and be immersed in these environments, without even thinking much about presence.”

Dr SusmitaBala, in her concluded remarks, thanked Dr Atkins for the interesting session and said that it must have indeed helped most students to gain some perspective into the matter.

Bangladesh become rising star in South Asia under the leadership of...

Cleantech and Fintech will Dominate 2018

SC transfers another 16 cases of sexual abuse in Bihar shelter...

Bangladesh calls for greater preparedness for the safety and security of...

Webinar on How to Globalise Education and Build World Class Institutions

Latin America and Caribbean on the Brink of Massive Solar Power...