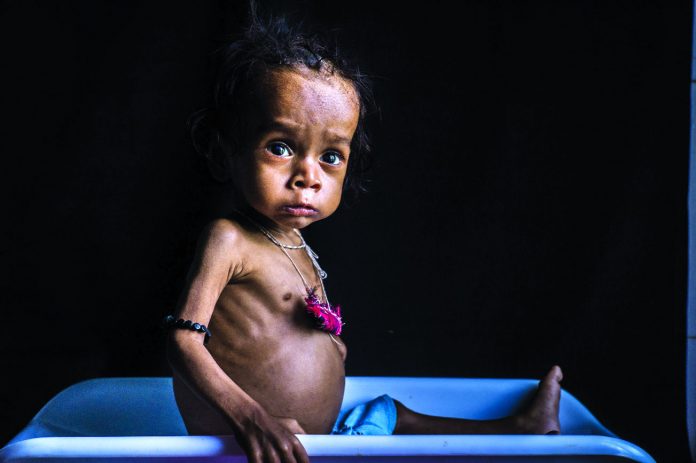 Malnutrition has been a major issue throughout the nation since the past few decades. The National Nutrition Mission (POSHAN) 2017 is a program under the umbrella of ICDS that is fighting the malnutrition problem in India. Its main target is to reduce stunting by 25% by 2022 in the identified districts which have the highest malnutrition burden through Anganwadi workers. It was an approach by the government towards reaching the 2030 SDG of eliminating malnutrition. The national represented surveys like National Family Health Survey-4 (2015-16), 5 (2019-20), and Comprehensive National Nutrition Survey (2016-18) in India can present the progress towards eradication of malnutrition problem in various states giving us the real picture and substantiate to understand the performance of India in this war against hunger.

The indicators of malnutrition across some of the major states have gone through massive changes in the last five years. Underweight, stunting, wasting and overweight are the indicators that are commonly used to measure malnutrition. As evident from the three major national surveys NFHS-4(2015-16), CNNS (2016-18), and NFHS-5 (2019-20), stunting in EAG state Bihar has decreased to some extent from NFHS-4 (2015-16) with 48.3% to 42% during CNNS (2016-18) and 42.9% according to recent NFHS-5 (2019-20). While states like Tripura, Himachal Pradesh, Nagaland, Goa, and Telangana have seen an increase in the prevalence of stunting from 2015 to 2020, another state like Gujarat has evidently shown no improvement in the levels of stunting, it has been consistent at around 39% in the past years. 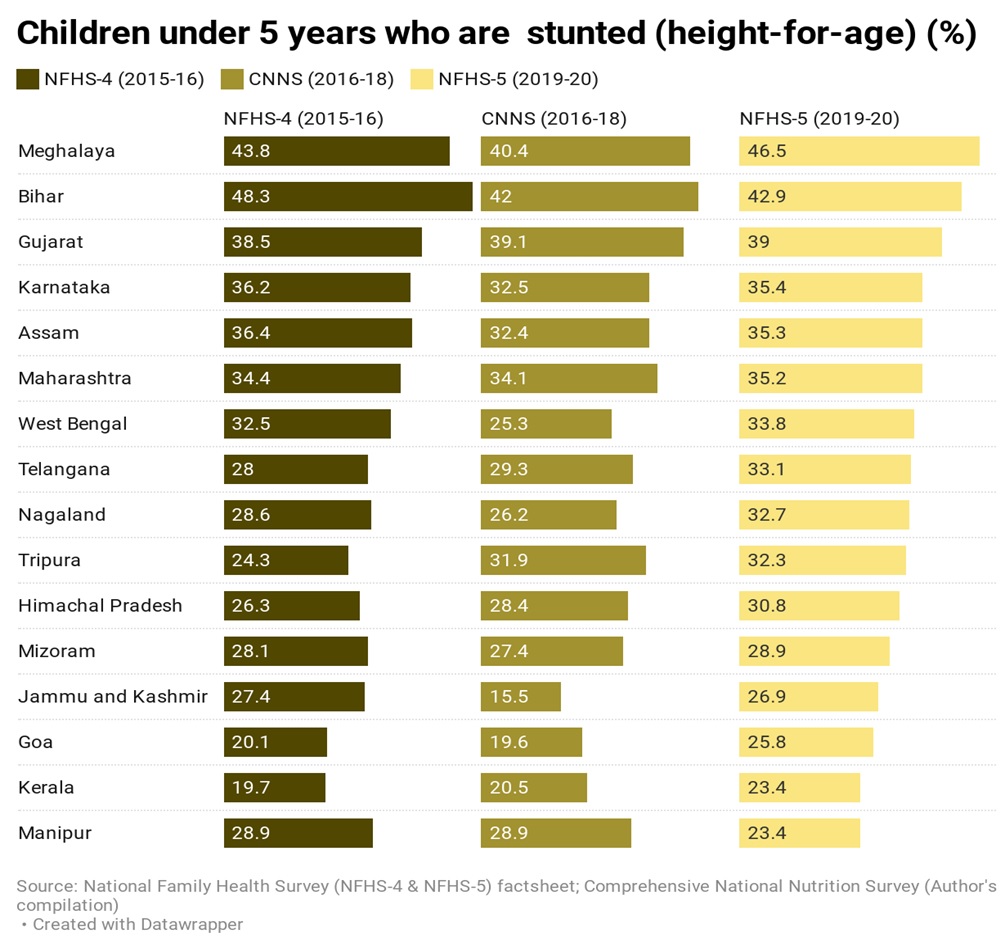 Although in the recent data of NFHS-5, underweight children in Bihar remains high at 41%, it has seen an undulating scenario of a decrease from 44% during NFHS-4 to 38.7% during CNNS and then the sudden rise. Telangana, Jammu and Kashmir, Himachal Pradesh, and Nagaland taking a rise has witnessed a proportionate increase of underweight children. 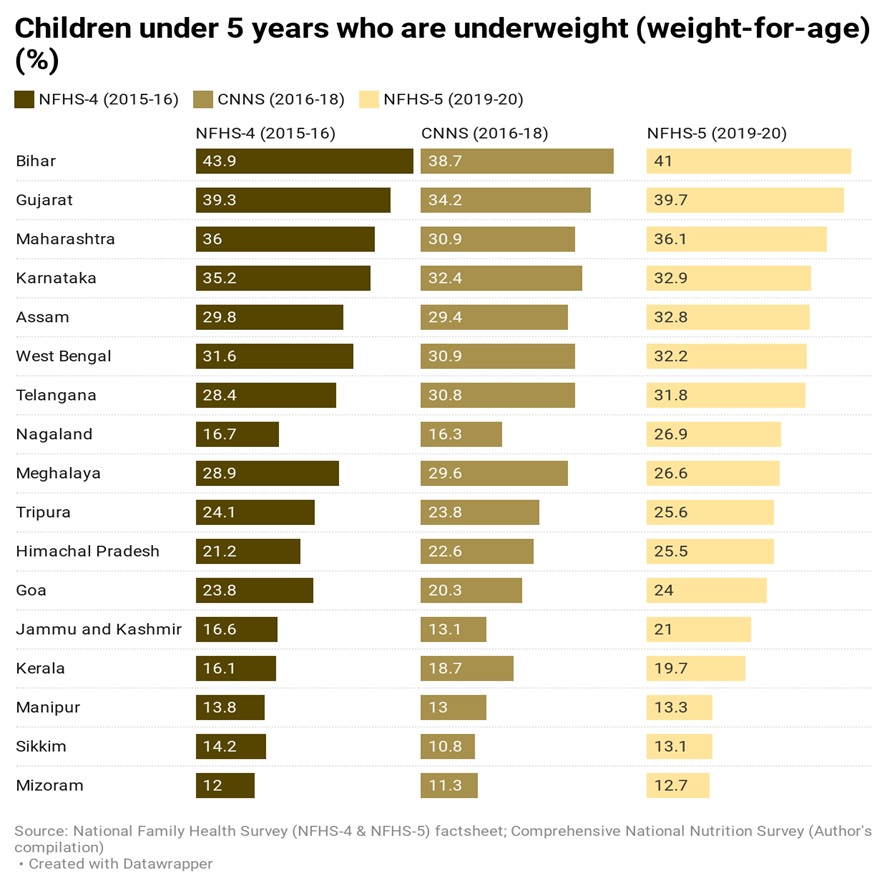 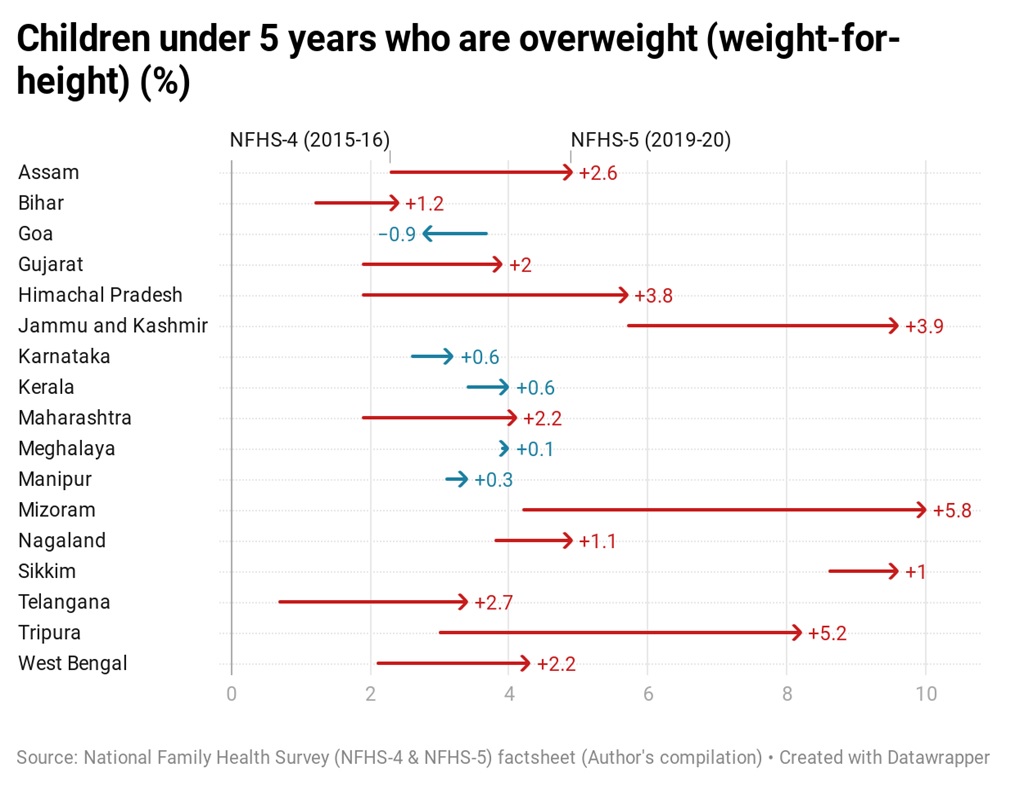 Meanwhile, Kerala being one of the well-performing states in most of the development indicators has recorded an increase in stunting by 23.4% and underweight children by 19.7% in the period of 2015 to 2020. On the other hand, overweight children have increased by 5.8% in Mizoram, followed by 5.2% in Tripura, where there was no significant change in the proportion of underweight children. 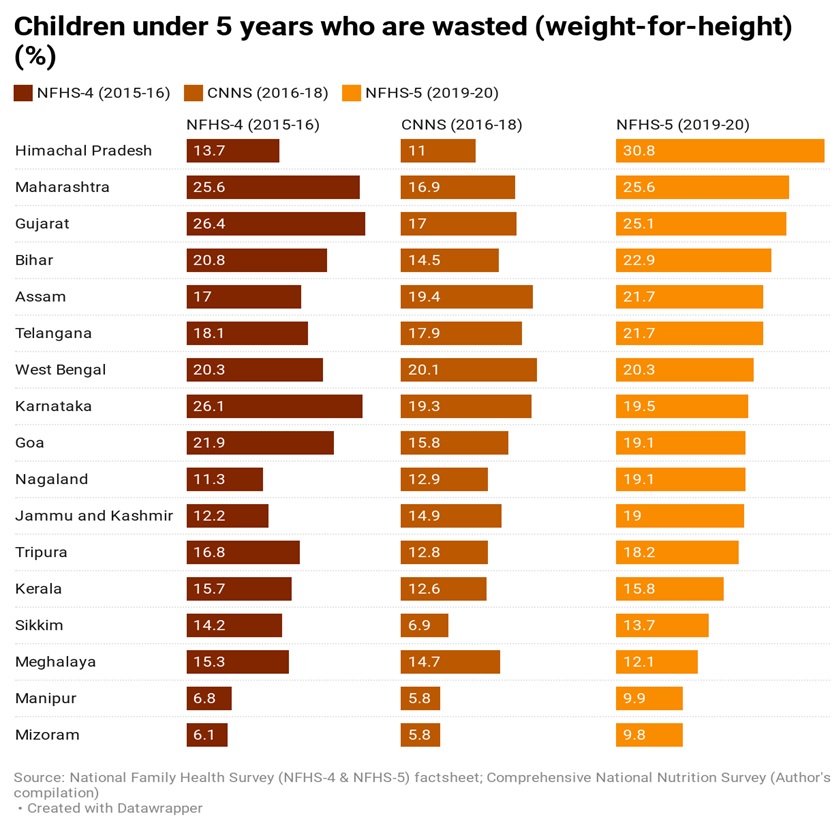 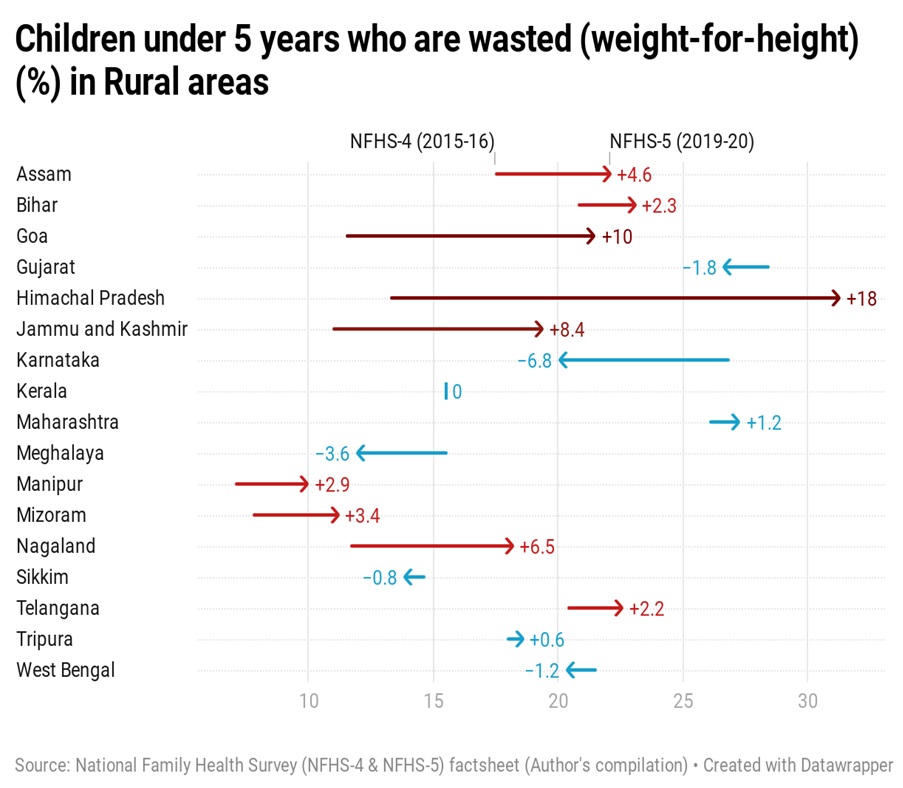 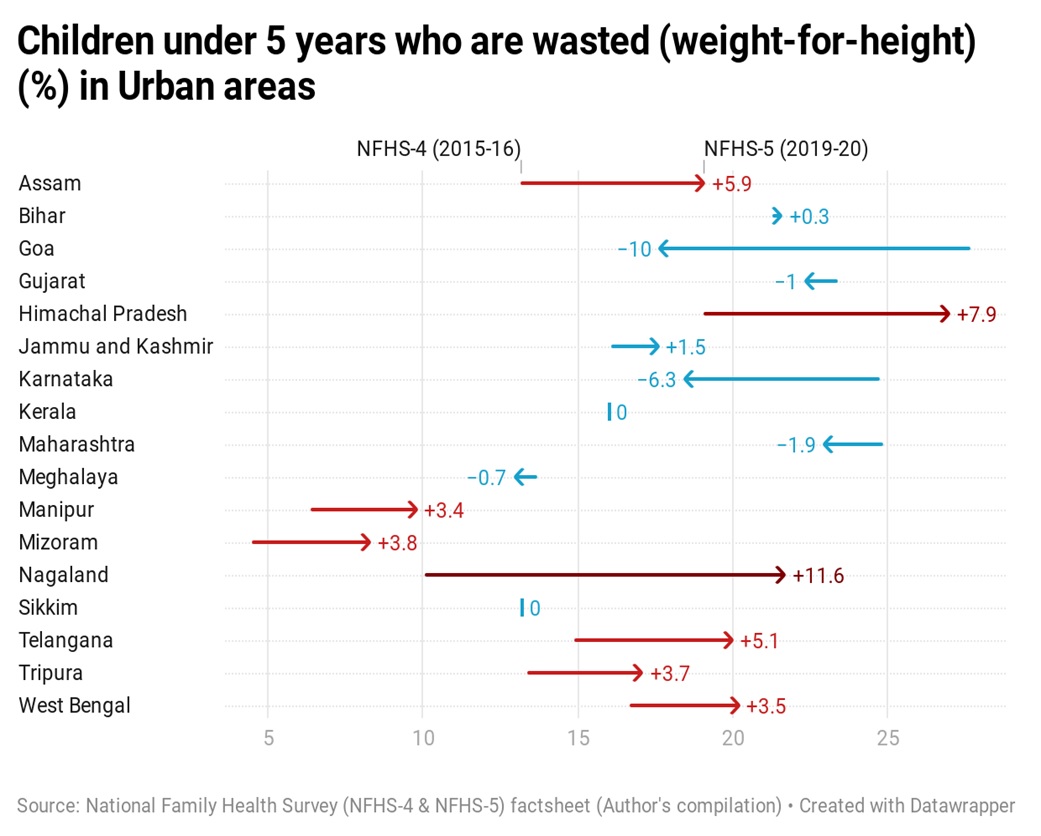 A major change has been observed in terms of wasting, especially in Himachal Pradesh, where the proportion of wasted in under 5 years children increased from 13.7% in 2015-16 to 30.8% in 2019-20. Karnataka and Goa have shown an improvement in the percentage of wasting. Further, the rural prevalence of wasting shows that in Himachal Pradesh wasting has increased by 18%, in Goa by 10%, and in Jammu and Kashmir by 8.4%, in the past 5 years period. Alongside the urban area, Nagaland has recorded a high increase in under 5 children wasting by 11.6%, Himachal Pradesh by 7.9%, and Assam by 5.9%, from 2015 to 2020.

Children under five years of age in India suffer from micronutrient deficiencies. With India suffering from numerous challenges and combating the unemployment and economic crisis, malnutrition still remains as one of the biggest hurdles in the way of achieving sustainable development. The major cause of malnutrition in India is believed to be economic inequality which leads to impoverishment and hence hunger and malnourishment ultimately taking the path to more deaths. The multi-generational impacts of malnourished women giving births to low weight babies can also be one of the main causes.

Reports suggest that 69% of deaths among children in India is caused by malnutrition. Among this, 35% of children suffer from stunting, 17% from wasting and 2% from being overweight. So, it is evident that India is still very far, almost 10%, from attaining POSHAN Abhiyan’s target figure of stunting. The POSHAN Abhiyan which was adopted to provide a holistic view to tackling the malnourishment problem in the country in 2017. POSHAN Abhiyan strives to achieve the SDG goal-2 which is the elimination of all forms of malnutrition by 2030. In 2020, due to the COVID-19 pandemic, the progress towards achieving the goal had potentially been reversed. The government of India had taken numerous steps in the past few years like providing mid-day meals at schools, rations to pregnant and lactating mothers by Anganwadi workers and ration supplies to families below the poverty level. According to the Global Nutrition Reports 2020, India is among the 88 countries in the world that will miss its global nutrition targets by 2025.

There seems to be a lot of work that needs to be undertaken so that this target can be achieved. Various government initiatives have been launched over the years which seek to improve the nutrition status in the country like Integrated Child Development Services (ICDS), National Health Mission, Janani Suraksha Yojana, Matritva Sahyog Yojana, Mid-Day Meal Scheme, and National Food Security Mission, among others. However, concerns regarding malnutrition have persisted despite improvements over the years.

Summary
Article Name
Did time win over malnourishment in India or vice versa?
Description
Children under five years of age in India suffer from micronutrient deficiencies. With India suffering from numerous challenges and combating the unemployment and economic crisis, malnutrition still remains as one of the biggest hurdles in the way of achieving sustainable development.
Author
Sampurna Kundu, Manali Swargiary, Chandrima Paul
Publisher Name
The Policy Times
Publisher Logo 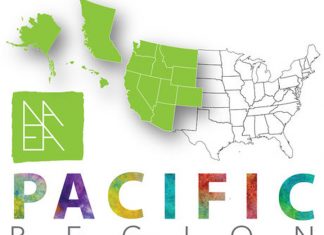 TPT Bureau | Agencies - June 26, 2019 0
The Pacific region is the destination for large hauls of cocaine and crystal methamphetamines. The low cost South American drugs have found its price...

‘We must implement the needonomics principle of needo-finance for modernizing manufacturing...

India Far From Being Covid Free; the Situation Likely To Worsen...

An Open Letter to Donald Trump 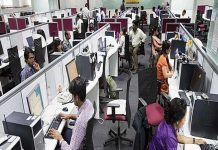 Not even one out of 10 Indian techies wants to join... 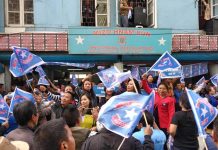 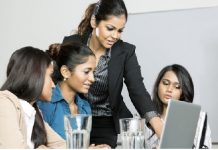 Women workers become the most vulnerable in the jobs market post-second...

Authors Should Have At Least a “Minimum Financial Security” Against “Commercialization”,...