One more horrifying news is coming from Pakistan amidst the corona pandemic. A Pakistan International Airlines flight P-8303 went straight to the densely populated residential area, Jinnah Garden area near Model Colony in Malir. The plane crashed with 91 passengers and 7 crew members on the Airbus A305.

The plane went straight to the residential area devastating all the buildings and parks. It first hit a mobile tower and then smacked over the houses. Before hitting the ground, as recorded on a tracking website, one of the pilots can be heard telling the base that they have lost control over both the engines, sending the international distress message “mayday mayday mayday”. 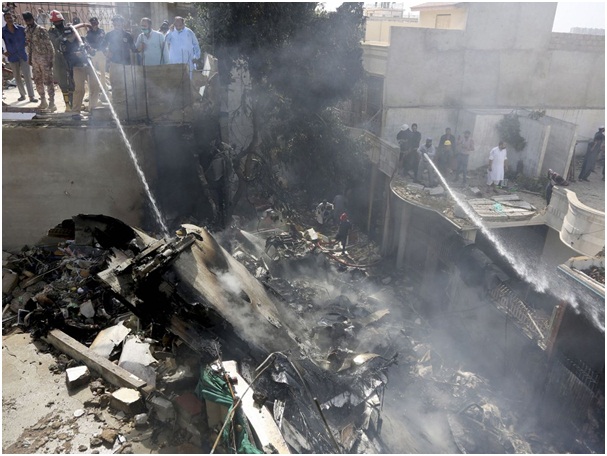 Ambulance and fire brigade spare no efforts to make their way to the accident spot. The flames of smoke could be seen in the sky as the clouds went black with the dust of the collision. When asked to the witness and the residents of Model Colony near the airport, they said that they are scared by the dreadful accident.

The accident took place just after some days of the permission granted by the Pakistani officials for the commercial flights to resume. Among all the passengers only one passenger survived the crash, although the total number of casualties is not clear yet. “Thank you so much, God has been merciful,” said the banker who survived the plane crash. 25 residents of the Jinnah Colony are injured in the crash and have been hurriedly taken to the hospitals. Meanwhile an emergency has been declared in all the major hospitals of Karachi.

Pakistan Prime minister Imran Khan tweeted “I am deeply shocked and saddened by the PIA CEO Arshad Malik, who has already left to Karachi. The immediate inquiry committee will be set up. My condolences and prayers to the families of those, who have deceased.”

Offering his condolence to Pakistan, Indian Prime Minister Narendra Modi tweeted “Deeply saddened by the loss of life due to a plane crash in Pakistan. Our condolences to the families of the deceased and wishing the speedy recovery of those injured”.

Bangladesh products will not face tariffs in UK after Brexit

Is A Global Recession Imminent?